Fish - one of over 70 different sitcom pages from Sitcoms Online 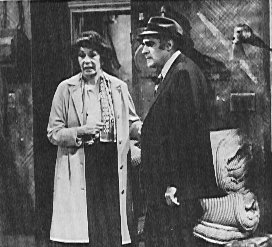 Detective Fish, the dilapidated cop in the hit series Barney Miller, got his own show in 1977. It was unusual in that he not only remained in character, but for several months continued to appear in Barney Miller as well. Fish simply presented the domestic side of his life.

Fish and his wife Bernice had decided to move out of their New York apartment and into a rundown house, in order to become foster parents to five P.I.N.S.--the social workers' term for "Persons in Need of Supervision." The term was an understatement, for the five racially mixed street kids were constantly causing problems. Loomis was the cut-up of the lot, the preteen hipster who befriended the dead cat in Fish's basement. Mike was the oldest, charming but streetwise. Victor was the blustery tough guy. Jilly the angelic con artist, and Diane the young TV addict. Psychologist Charlie Harrison (played by onetime child star Barry Gordon) tended to be too impractical to help very much, leaving huffing, puffing Fish and chattering Bernice to quell each uproar and re-establish normalcy. Click here for the Fish episode guide - it contains the title, original airdate, short summary, and guest stars (when available) for all 35 episodes.